Munch and Johns and crosshatching

In 2011 I made two photo collage works (see below) dealing with the similarities between the Norwegian Edvard Munch and American Jasper Johns – both outstanding painters and printmakers, both interested in psychological explorations and one associated with European/German expressionism, the other with American abstract expressionism.

I was inspired, of course, by their crosshatching or, rather, John’s use of crosshatching. It was only a short time back that I had visited the Munch Museum in Oslo.

While I have never particularly liked The Scream in any of its versions or his – too many – self portraits, I was struck by the Self Portrait. Between the Clock and the Bed painted between 1940 and 1943:

And I was fascinated by the crosshatch pattern on the bedspread and Johns’ somewhat similar crosshatching as a connector between the two.

It belongs to the story that I own a few prints by Johns, among them the 1977 Untitled from ULAE – United Limited Art Editions created by legendary Russian American Tatyana Grosman:

This is a very typical Johns print from those years: the Savarin instant coffee metal can with paint brushes on a wooden table, the crosshatch pattern in light and dark versions, the image divided in three parts and some enigmatic stuff in the middle – brush dots and fingerprints. (Johns has always been enigmatic, a bit like Bob Dylan*). And it’s printed on a thick rough-surfaced J. Green paper with amazing saturation and depth.

I’ve been looking at it almost every day since 1977.

Little did I know…

Little did I know at the time that 5 years later a large comparative exhibition (about 130 works) would be arranged that explores the links and similarities between Munch and Johns that I had been grappling a bit with.

It made me very happy.

From June to September 2016 the Munch Museum in Oslo held the exhibition Jasper Johns + Edvard Munch which is organised by the Virginia Museum of Fine Arts (VMFA) in Richmond, Virginia and curated by John Ravenal.

The exhibition intro offers an interesting insight into how Johns got inspired by Munch:

With this exhibition we aim to show that Munch has had a far greater influence on Johns than was previously known.

The exhibition consists of about 130 works – paintings, prints, drawings and photographs. An important factor is the way Munch’s late self-portrait Between the Clock and the Bed (1940–1942) is linked to Johns’ series of abstract cross-hatch works that became something of a signature motif for him in the 1970s.

The similarity between Johns’ cross-hatch pattern and the pattern on the bedspread in Munch’s self-portrait was not originally intended.

However, from 1980–1984 Johns chose to use this similarity explicitly in a series of paintings with the same title as Munch’s painting.

And here is one of Jasper Johns’ works with a title that clearly refers to that inspiration – while he doesn’t call it a self portrait:

One may speculate forever, of course. Was that bedspread so important to Johns as curator Ravenal seems to believe? There is another story, namely that one of Johns’ friends had sent him a postcard with Munch’s painting and that this influenced the young Johns a lot.

I find it interesting that writer and filmmaker Michael Crichton – who had known Johns for more than 20 years and collected his works – in his 1977 book “Jasper Johns” says that the crosshatching idea derived from a fleeting visual experience and quotes Johns himself on this:

“I was riding in a car, going out of the Hamptons for the weekend, when a car came in the opposite direction. It was covered with these marks, but I only saw it for a moment – then it was gone – just a brief glimpse. But I immediately thought that I would use it for my next painting.”

As likely an explanation as any – perhaps it was raining a bit too and these cross-hatching patterns were created by seeing the car through the rain drops on the screen?

Enigmatic again. And perhaps – if there is an answer – it doesn’t change the world, neither Munch’s, Johns’, the art world nor our world?

Things just happen. Fleeting moments come and go. We are more or less open to them, there and then…

It would be interesting to know whether Jasper Johns has made any comments to the ongoing Munch-Johns exhibition.

I had been working with crosshatch patterns and filters which you can find in Photoshop and applied them to what I had called Pixelations, i.e. the exploration of what one may find when digging ever deeper into the pixel “ocean” of a picture, virtually any picture. Here are some Pixelations.

It was in that process I found the link to both Munch and Johns.

And when you search Google for “crosshatch in art” you’ll find many references and one actually explaining that there are at least six different kinds of hatchings. The one that comes closest to that created by both Munch and Johns is “basket” or “woven” hatching as Paul Heaston calls it (but do take a look on the other types on the link). 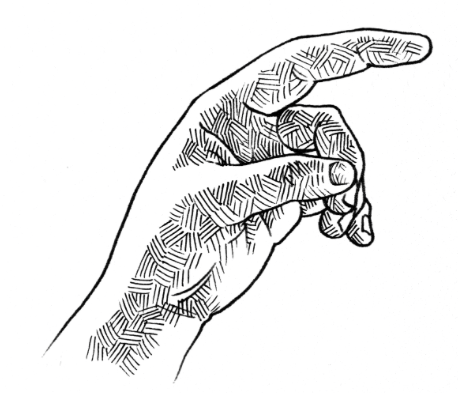 Munch’s bedspread comes quite close to this one. Actually, the Munch Museum has found the original and put it on display: 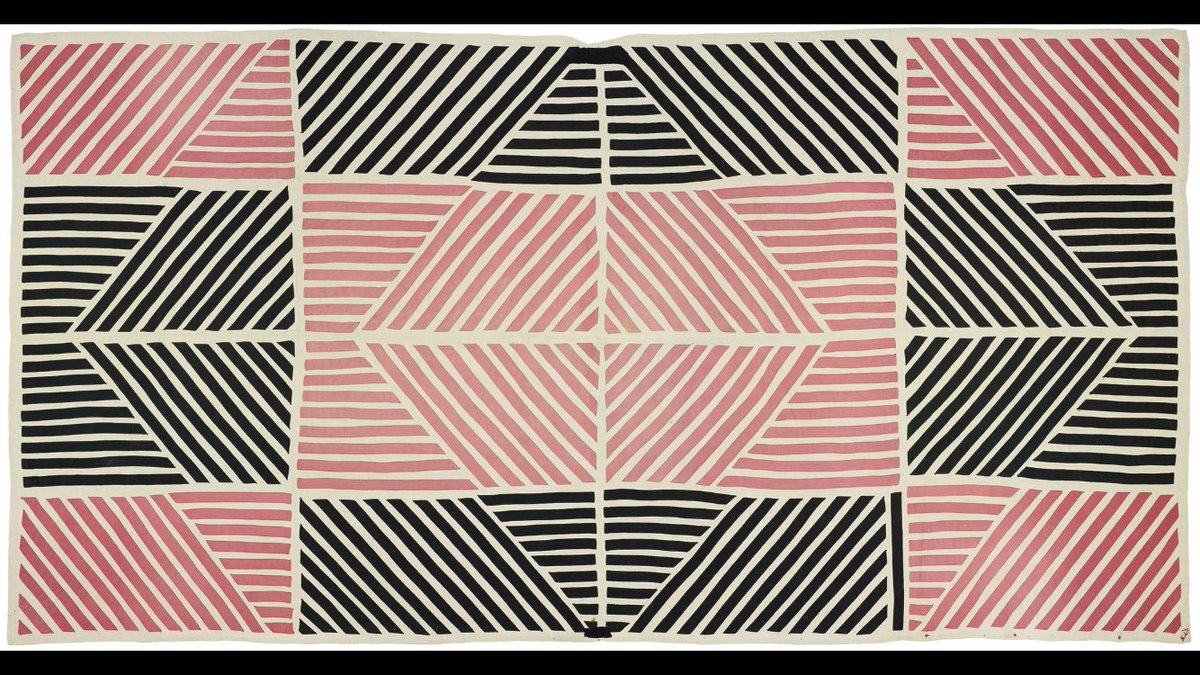 Munch’s classical work is inserted in both. In all the images, there is a more or less subtle crosshatch pattern in the bottom, elements from my Pixelation series. The little sketchy thing at the bottom of Black Granite is an irregular cloning of a small spot in the left element in Between the Bed and Two Clocks, indicating that the two are related.

The clock in that image actually stands in our kitchen; it’s a Swedish Mora clock. I simply too a picture of it and placed it in a hand-drawn frame and hung it on the “wall”.

I found the (plast) toy skeleton in one of my drawers, placed on an oval shaped old wooden tray and did a negative of it that made the tray whitish. The skeleton has the crosshatch pattern  and tray’s oval shape corresponds with a couple of other oval elements in the picture.

And the Guinness Beer Can? It may be difficult to see it here but it’s all in crosshatch, actually very beautiful and the harp of course is where you see the pattern best. In the Black Granite it corresponds with the Savarin Can, both being examples of “iconic” artistic design of everyday consumption objects.

The grey object floating outside the rest in Black Granite is a window and the beer can is placed on the edge of a table, something that I drew with a digital pen. And the image from Johns’ 1977 Untitled is a simple iPhone photography of my own print where I have changed the colours slightly afterwards.

It’s as simple as that! An inspiration based on many years of looking at certain art pieces. A play of many image elements. An experiment in balancing and references. A use of small objects found where you are. And not the least a play of colours and rhythms.

More on my homepage about – Black Granite and Between Two Clocks And A Bed  – where there are other works with crosshatching too.

And not to take it all too seriously, here is – finally – my comment on Munch’s The Scream called Munch: Oh My God! 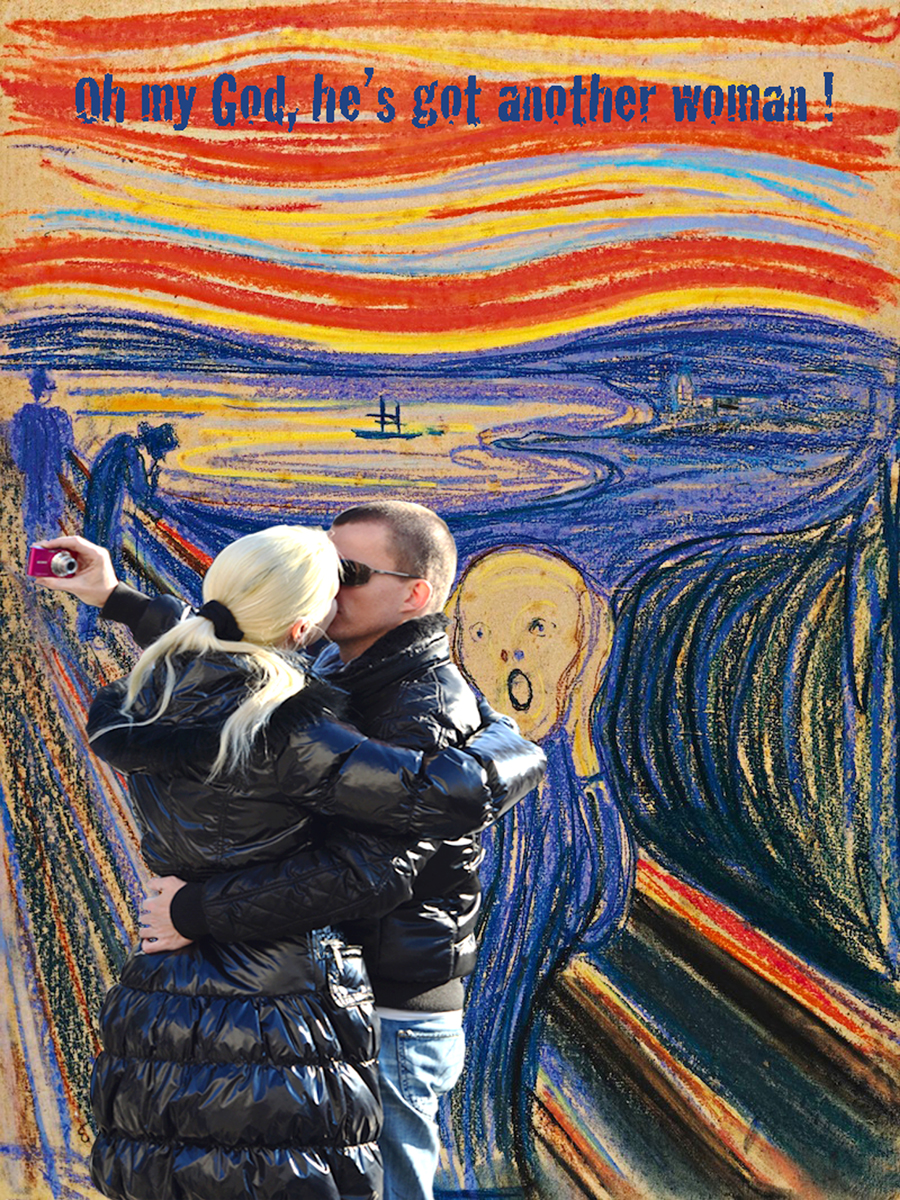 In lieu of a conclusion on anything because everything continues along its own dynamics and whims: Andy Warhol is another artist who has been inspired by Edvard Munch. Even re-done them Warhol style.

I never found them half as interesting as what Jasper Johns seems to have gotten out of his Munch inspiration.

John B. Ravenal
Jasper Johns and Edvard Munch: Inspiration and Transformation
Catalogue book of the mentioned exhibition curated by Ravenal

Vimeo video in which Ravenal speaks about the exhibition.

*) In Michael Crichton’s book about Jasper Johns, he offers this fairly dylan’esque answer to the question
“How do you work on a painting?”
– Well, I begin at the beginning, and go on from there.”

2 responses to “Munch and Johns and crosshatching”