The new Tate Modern building* was inaugurated on June 17. I was there in late May and much still looked like a building site, here the turbine hall:

The main exhibit at the time was “Performing For The Camera”; curator Simon Baker talks here about it (it ended in June). It’s about how we all act – more than ever today – in front of a camera, act differently from how we would otherwise have because there is a camera.

It raises the question – why do we begin to act when a camera is around? How has the camera been serving throughout modern times as a tool to document or create art works, performances in particular.

There is an excellent review in The Guardian by a critic, Adrian Searle, who is actually participating in one of the exhibited works in which he is watching a female artist undress.

Apart from insights into the history of art – through e.g. Yves Klein, Beuys, Keith Haring – and their relations to photography, this excellent exhibition kind-of tells you what lead us up to today’s fascination with the mobile, lightweight cameras: If it is there – and it always is today with almost everyone – let’s use it for something, be it documentary, selfies, experimenting and showing others not only what we do but also who we are.

The idea and quality of sharing hasn’t changed. The quantity in which we do indeed has.

Since you were not allowed to take photos – what a pity!! – here are lots of images from Google. I still wonder why the (paying) visitor cannot take pictures when every work is already on the Internet?

Finally, about this exhibition. It wasn’t the first time I encountered the black-and-white photographic works by Francesca Woodman – as remarkable as enigmatic self-portraits, staged but nothing of the snapshot selfie-type of today.

But it was the first time I found out that she did only a few hundred photos and then committed suicide in 1981 at the age of only 22.

You may see her moving photos at Google too. Allegedly she was deeply disappointed with not getting favourable responses in her struggle to make a career as photographer.

With this knowledge I find it impossible to see her works without sensing  the pain, depression and despair inside them. Inside her.

Of course you can’t visit Tate Modern without seeing some of the collection. I have never been there without re-viewing Mark Rothko’s monumental works. Rothko is another artist who committed suicide but later in life, at the age of 66.

I’ve always found it wonderful that Tate Modern does not arrange the art chronologically but thematically. This time I fell in love with the  juxtaposition of Claude Monet and Mark Rothko and the fact that Rothko took inspiration in Monet’s works. See a bit about it here.

Here a couple of my shots which make the point, Monet on top:

These works hang in rooms with very little light, thus the slightly blurred and grainy character of the photos here. 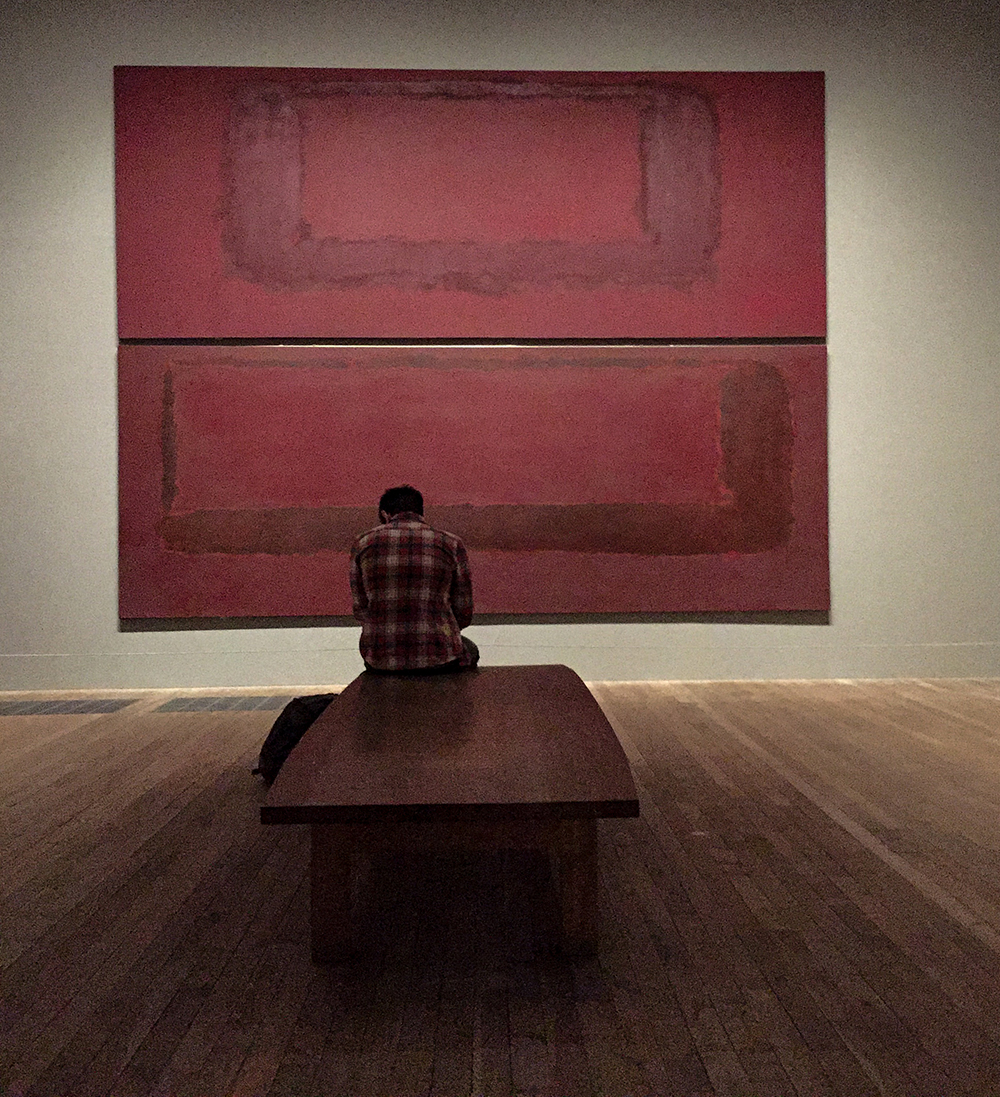 And finally, I can’t help being fascinated by another towering figure of contemporary art namely Gerhard Richter. Those who want may easily see the affinity of these works by him and the Rothko-Monet connection.

The objective behind the Tate Modern redesign and expansion is clearly expressed in the words by Chris Dercon, Tate Modern director:

‘Art is one of the most dynamic and engaged forms of human behavior, and when people step into a museum today, they don’t want to step out of their life, they want to get closer to it. The new Tate Modern will be so much more than a container for art, it will be a platform for human encounters.’

So true! Tate Modern has what it takes to make that dream come true.

And, so, I walk happily back over the Millennium Bridge toward St. Paul’s, looking forward to the day when I shall explore that new Tate Modern…