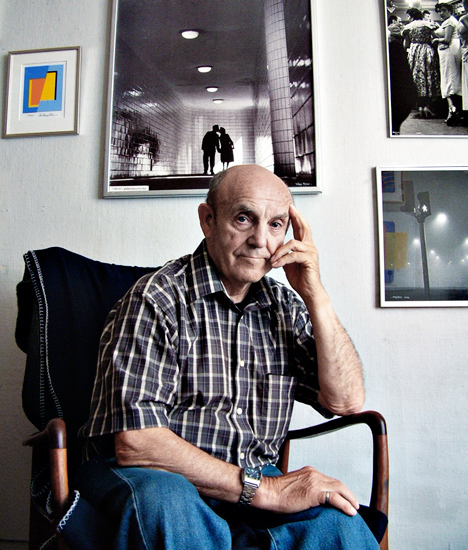 Viggo Rivad, grand old man of Danish photography, exhibited for the first time in 1946 and has been influential in his field over almost 7 decades.

He has given Denmark a lot of classical photo series like A Goodbye, Lauritz, Koefod’s School and B&W Teglholmen, several photo books from around the world, public art installations such as at Copenhagen Kastrup Airport and the Danish Railways (DSB); 40,000 negatives donated to the Royal National Library and collections of photos at the Museum of Photographic Art in Odense. His retrospective exhibition there in 2012 counted 180 master works.

With deep respect for his subjects he gave dignity to the under-privileged, the old and the marginalised people. He would get to know them before he pulled out his camera, even moved in with them and made friends like he did at Kofoed’s School (a centre for people without work, vulnerable citizens and others at the bottom of society) and the occupiers’ movement (BZ) in the 1970s.

He was the photographic story-teller par exellence – and great at talking about his works, their background, his intentions and how he’d created them.

But he wasn’t interested in talking about himself. Modesty is a catchword of high relevance to describe Viggo Rivad – who never wanted to earn his living by photography but served as a taxi driver for decades in Copenhagen, the city he was born in, lived in all his life, photographed and loved. A bit like Saul Leiter.

But that was before the sharing opportunities of the internet; in addition, he detested anything commercial and was unable to promote himself. “It should be about my pictures, not about me!”

He was a pioneer with a concept who intellectually and artistically remained where he felt at home no matter what trends rushed by. Curious and experimenting, yes – following fashion, surely not.

While he did explore digital photography and PhotoShop in his late 80s, he was a man of film cameras. The small old kitchen in his two-room apartment at Amager, Copenhagen, served as his darkroom; the enlarger was mounted on the inside of the kitchen door, the sink used for the chemicals. He did it all by himself.

Rivad took pictures until the end of his 80s. Then the legs did not really carry him so well and his eyesight was no longer what it used to be. But during one of our countless conversations he said – “look, I can still see pictures even though I don’t have a camera with me. I sit there on the bus and watch a young couple and I say to myself that the guy will very soon lean over and take her hand in his – and there is the picture. And that’s exactly what happened!”

He was a master of black-and-white  but also colour images too. Not that many knew it and he was always a little disappointed that that side of him was never really noticed.

In the early days he had no money to buy expensive equipment. Rivad taught me early to never put emphasis on expensive equipment or think that you must have the latest technology to shoot a great picture. But later he worked a lot with a Leica. As a matter of fact, he wasn’t a perfectionist when it comes to technology – but he was when it comes to how he treated those he worked with, always respectful and making them feel at ease.

The important thing in a good picture is the right moment, to compose it well and to tell a story – but the story in the photo doesn’t have to tell it all. The best image is the one that encourages the viewer to build upon the story in the picture and continue the story he or she can tell outside it.

His great inspiration when he was young was Edward Steichen’s “The Family Of Man” – the 1955 book of 600+ photos from around the world that had been exhibited at the Museum of Modern Art, MOMA, in New York. He was bent on trial and error until he could take such pictures.

For his time, he was a globetrotter and explorer. His motto was “see, this is what I have seen!” But he thought it got increasingly difficult to show people something new they hadn’t see after everybody began to travel more, acquired lighter compact cameras and, later, mobile cameras and videos and could share them across the Internet.

It’s beyond doubt that Viggo Rivad has made a huge contribution towards getting photography accepted as an art form on par with graphics, painting and sculpture. And in the process also promoted a distinctly humanistic quality.

Rivad the pioneer didn’t mind causing a little debate. More than half a century ago he submitted a rather blurred image of a gondola in Venice – a place he loved, returned to and did a book about – to a photo contest. The unsharp character had been caused by the fact that he had climbed up upon some wooden boxes close to the Rialto Bridge and at the very moment he was to press the release the boxes moved under him. The great advantage was that the gondola, thanks to the camera’s unpredicted movement, also moves as if seen in a movie.

The photo establishment of the time considered it a scandal that the self-taught young man had the audacity to submit such a bad image. And, worse, that he won the 1st prize and couldn’t even take a sharp picture!

Rivad was the first Danish photographer to obtain a three-year working stipend from the Danish state’s Art Fund – today DanishArt.dk and, later, the life-long state benefit. In addtion he was awarded the Th. Bindesbøll Medal, The Cultural Award of the Danish Labour Union, Ilford’s Portrait Prize, the N. L. Høyen Medal and the Fogtdal Prize of Honour.

Viggo Rivad grew up under straitened circumstances, his childhood being good thanks to a very loving and hard-working mother but also rather problematic. His greatness consists also in having overcome these facts in a constructive manner through documenting the lives of people he most often felt an affinity with.

There are few jobs he hasn’t tried – besides being a boxer and a racing cyclist when he was young. the latter gave him an opportunity to mee the Pope in Rome. He had a hard time forgiving the man who discreetly took down his hand when Rivad during the audience tried to take a picture of the Pope.

Likewise there are very few people he has not been able to interact with and develop a friendly relationship with.

Rivad the taxi driver met high and low – personalities of culture, famous actors, celebrities musicians , diplomats and MPs – among them former Danish prime minister, Anker Jørgensen, to mention a few who got in and out of his taxi at the time when a safer society did not require that they had body guards.

I traveled with Viggo Rivad through China in 1983 and experienced how – by speaking funny Danish, using body language and gestures with a big smile – he made Chinese in the streets and villages open their homes and happily let him take their picture. He believed that the fact that he wasn’t tall and in no way imposing or threatening helped him a lot to establish a confidence in no time.

In Egypt he had won the heart of a family because he had returned again and again to visit over the years. That resulted in two books – one about “The Friends in Aswan” and one about his dear “Amra”. In the same street where the family lived sat a shoeblack whose face was disfigured beyond words. For some time Viggo had been thinking to himself whether or not he should try to obtain a permission to photograph him.

His host family and other friends in the street one day asked him whether he wanted to take a picture of the poor fellow and, if he did, they said it would be OK. But when Rivad sat there and had his shoes polished, he looked into the eyes of the man – and then took down the camera. This was a too sad ahuman fate, too difficult to look at. “I just could not do it. Such a wretch. What joy would it give me to have that picture when I came home? I just could not.”

The men around him applauded him for not taking the picture. He gained more friends and the respect and appreciation also from the shoeblack.

One wonders whether many photographers would not gladly have shot that unique picture today, particularly when told it would be OK. But for Viggo Rivad in that moment the fellow human being and the professional melted into one – and that is what you can allow yourself when you are non-profit, devoted to humanism and respect and know yourself.

There are pictures that shall not be taken, pictures that may hurt somebody else. His inner voic told him when to take down the camera.

Viggo was my friend over 33 years. He was my photo mentor. Happily – I think I can say for both of us – I managed to carry through a film project with him in his 92nd year (2015). I went from Lund over to Copenhagen a number of times, he had prepared some meetballs and potatos or I had bought lunch in the nearest supermarket. And then I put up my iPhone and simply asked him to tell about his works, one after the other – the background, story, why he was proud of it, etc.

He could still tell a story and keep the line. He could twist words, make jokes and tell a funny story about somebody he had met.

Once when he was driving a large truck it happened that a famous Danish revue theatre diva, Liva, got on board and asked him to take her to her destintion. In exchange for his kindness she asked whether there was anything she could do for him – and he said: Yes, can we sing together that song of yours that I like the most. And they did, together – and he drove more and more slowly to make the moment last longer.

I shall now edit all that raw film and post it on this homepage. With a special, loving hand. For Viggo.

And I’ll use the melody he liked so much in it. Its refrain states that “memories I’m allowed to have”.

We certainly have memories. And no one can take memories from us who met and loved Viggo.