Amazing, warm, enigmatic, beautiful and full of symbolism – the boats and the thousands of keys hanging in millions of red threads. There you go: Shiharo Shiota ‘”Key In The Hand” at the Japanese pavilion – one of the best pieces at the 2015 Venezia Biennale!

I’ve been to all the Biennales since 2007. My admittedly very subjective view – and what else could it be? – is that this year’s is far from the best. It’s overarching title is “All The World’s Futures” and it has three filters – 1) Garden of Disorder; 2) Liveness: On Epic Duration and 3) Reading Capital.” It is curated by Okwui Enwezor, Nigeria.

It takes place at three places in Venice – the Giardini space (29 pavilions), the Arsenale space (31 national pavilions plus lots of single artists) and all over town in the so-called Collateral Events accepted by the curator.

This year it has a record 89 participating countries and over 150 artists. Many see the bi-annual Venice Art Biennale – now in its 56th year as the world art event.

And of course it is fascinating. Its diversity is completely impossible to convey to anyone who has not been there. It’s  been going on from May 9-November 22, 2015 – and I am here in Venice the last 7 days – to explore and learn as much as I possibly can and with pleasantly few visitors in Venice.

I write this first of two articles midways, having still quite a lot to see – but I have “finished” Giardini and Arsenale.

Here my scattered but quite consolidated summary of the Giardini and Arsenale spaces:

The Danish pavilion (below) – well, I had a hard time getting excited. Perhaps I just don’t understand this type of art. If so, I also don’t have to. The British (some kind of allegedly fun fart art?), the French (a moving tree) and Austrian pavilions (“structure shifts between historicity and modernism” – i.e. sterile and boring) were also rather disappointing to me.

Mozambique was at the Biennale for the first time – with a good combination of traditional and modern art. With many and different artists and a very attentive host who asked you to fill in a questionnaire so the pavilion could get even better next year. That was the only pavilion I visited with such a sympathetic attitude. Sure on my list for 2017:

China at the Arsenale – huge, inventive, friendly, multi-media and lovely music too, positive atmosphere and tons of Chinese meeting you on screens and talking about life and art-making – a pavilion with history but anyhow more close to the future  “and to some kind of artistic joy that most others were lacking:

One of many amazing single artists at the Arsenale, here South African Kay Hassan’s portraits made entirely of clippings from magazines and newspapers. The standing white piano and the knocked-over black piano he calls Empire Melody…

Arsenale is an old Navy shipbuilding construction. It’s huge! The world should convert all such military facilities to art spaces – and we would have more peace.

To give you an impression of how exciting some of the old buildings of Arsenale really are, here is one example. Each is different from the next and in the best of cases, art and environment play to each other in harmony – or exciting contrasts. 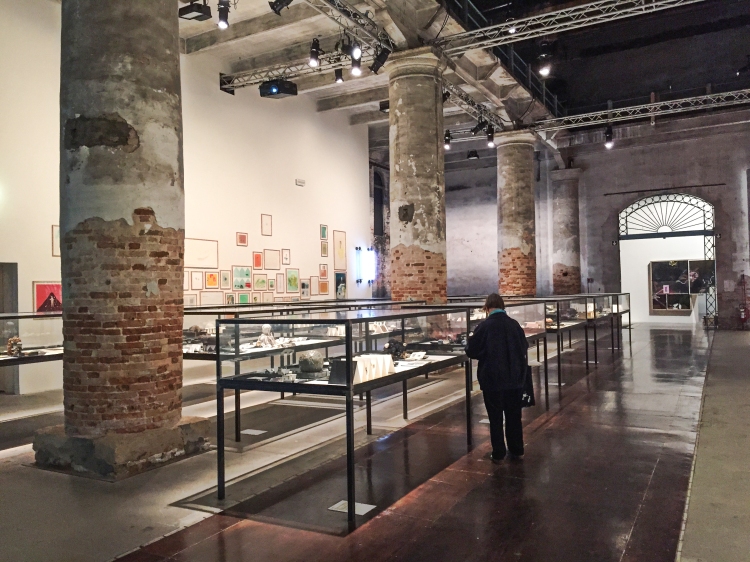 And – yes!! – there is a lot to see, in fact too much for both a young one and for an old one like me. But I would not be without any of it. In the midst of a gloomy world with wars, militarism and racism, the art world is still doing no harm but manifests creativity and struggle and gives me hope.

For All The World’s Futures…