Art reflections, How is it done?

Berlin by chance and life moments

Took a few days off to explore one of the leading cultural capitals in today’s Europe – on my way to another, Basel, where I teach peace at the World Peace Academy.

Once again, I’m taken aback by the intensity of culture and history in Berlin. Not only 600 art galleries but art everywhere, not the least street art.

It’s important to experiment and grab the moment. I had my iPhone and Nikon D 7000 with me. I shot this one out of the train window on my way from Friedrichsstrasse to Nature Park Schöneberger Südgelände:

The more I looked at it upon my return, the more I liked it because of its movement. The whole picture moves but the huge metal structure is almost swirling around its own axis too. I changed it to black-and-white, added a little contrast and covered a reflection in the train window, then added the white border with the thin-thin black edge marker, both of which contrast the movement and holds the image in place. That’s all.

Here is another spontaneous shot, this time by the iPhone – Hipstamatic, Americana lens and Big Up film: 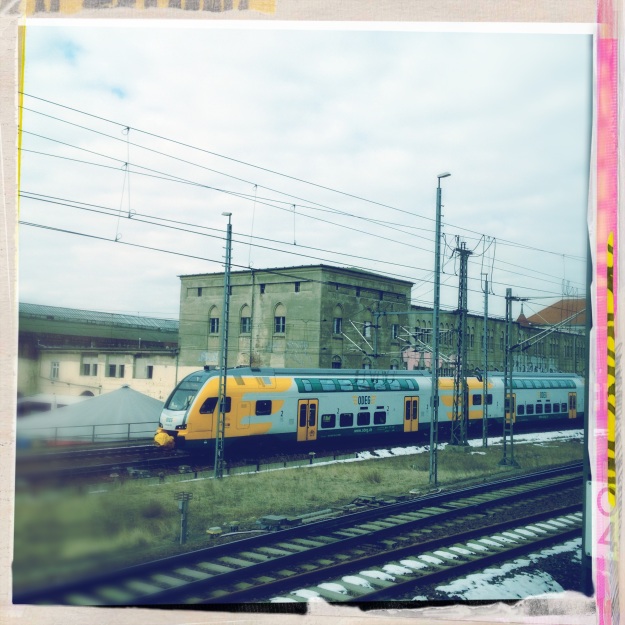 Old East Berlin, dull green-grey station building, the grass and the modern train in almost the same basic colours but with a yellow touch as well as the the greyish sky and all of it finished by that hefty frame which Hipstamatic, not you, decides to add. The right-side bottom of the frame by chance added also what looks like a pile of old snow. Fitting.

I think I’ll never tire of the surprising little moment where things happen to come together without you doing anything planned. And there it is! Let it be, be what it happens to be at that very moment. In addition, had I not had this little picture from that train ride, would I think of it today – would I even remember anything from it?

Well, pictures do not always tell a story, they let you invent one. Here is another shot out of a train window. What story could we write about this moment in these three people’s lives? All we know is that they turn their backs to each other on a cold April day at a desolate train station in Berlin. The woman looks a wreck, waiting, walking, or just shuffling her feet. A quick cigarette, as if she steals a moment’s relaxation. In spite of all.

I stole that moment too. And now you and I may think of what it means – this life moment.

If anything in particular.

2 responses to “Berlin by chance and life moments”